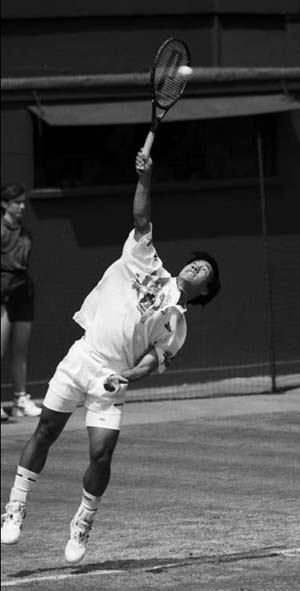 When shooting with film we always had to keep an eye on the frame count, changing the film when the play had moved to the other end of the park and there were just a couple of frames to go. Striving to use every frame on the roll was a recipe for missing a goal rebound, you use your last shot on the first attempt and are then film-less for the rebound. Digital has saved a lot of these issues because you get so many more shots before you have to pause. Digital also gives more physchological freedom, on film you would sometimes miss a shot from a split second dither about whether it was going to be any good - now you shoot and trash later!

The rate of shooting in field sports can be very varied. At one game covered by your author, the first film was used in a sixsecond spell in the first 10 seconds of the match. Right from the whistle, play had moved to our end and all hell broke loose with shots, saves, rebounds, and bodies flying all over the place. This was followed by an 11-minute spell in which the ball never left the other half of the pitch and not a single frame was exposed. When that happens you just have to sit on your hands, any exposures you make a likely to be scrappers anyway!

The time to change film or compact flash (or even lens) is while play is at the other end of the park. When the action is unfolding before you there is time to focus (usually), time to zoom (rarely), time to change cameras (very rarely) and never ever time to change lenses! Having a camera bag is a complete waste of time, it is one more thing to keep an eye on when you should be watching the action - use a vest or belt pack (a vest is often a little warmer as well). If you need to be mobile (eg tracking sideline play in rugby) you need a camera and lens, everything else simply slows you down.

This piece is being written in the middle of the highest summer temperatures on record. It is a little hard to remember cold November matches with sleet driving into your gear and fingers so numb that niggling a flash card out is a huge task. You need to plan your strategy for keeping warm and dry. You need boots rather than cotton trainers, a good hat (35% of your body heat goes out of your head), fingerless gloves, double- or fleece-trousers and a high-performance jacket (or two!). Jeans are the worst possible material for protection in cold, wet weather.

At the other end of the scale don't forget your sunscreen and something to protect the head and back of the neck. A cricket match is a long time to be out in the sun!

Personal safety is also a consideration. Make sure that you are insured for what you are about to do (especially for extreme sports). As Graham Lamb's shot (right) demonstrates graphically, you also need to keep your eyes open, sometimes


Please Note:
There is more than one page for this Article.
You are currently on page 6 Contact Mike McNamee


There are 224 days to get ready for The Societies of Photographers Convention and Trade Show at The Novotel London West, Hammersmith ...
which starts on Wednesday 17th March 2021


SINWP Bird Photographer of the Year 2020 in aid of RSPB

Last years competition raised a whopping £2,850.84 for the RSPB

Win a copy of Nik Collection 2 by DxO software