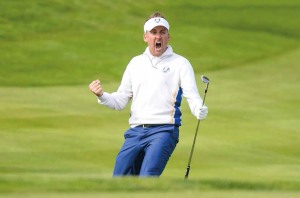 I can't believe that it has been four years since I was walking around the Celtic Manor Twenty Ten course, covering the first ever Ryder cup in Wales. And four years later here I am covering the same event again, but this time in Scotland and the stunning course that is Gleneagles. It's been a totally mad year for me ie the Champions League Cup Final in Lisbon, the Commonwealth Games in Glasgow and now the Ryder Cup.

Once I knew I had a pass for the Ryder cup, the panic set in, accommodation, flights and driving arrangements need to be arranged. I managed to book a fairly cheap B&B in the heart of Glasgow, about a mile from one of the designated media hotels. For the record the reason I didn't stay in one of these designated hotels was the cost of the rooms, they are expensive at the best of times.

So like the Commonwealth games it was a case of ensuring all camera gear was ready, wet weather gear packed and plenty of clothes etc The gear is pretty much standard and I take the following:

From a media point of view the Ryder cup runs from Monday until Sunday, and is broken up into four practice rounds and three competition games (foursomes, fourball, then singles matches). I arrived in Scotland on the Wednesday, which gave me a chance to get my bearings and book into the B&B, etc. On Thursday morning I took myself and my gear to the media pick up point and jumped onto the coach; one hour and 20 minutes later I arrived at Gleneagles. I was greeted by the same airport security measures that were used during the Olympics and Commonwealth games; once through, it was a case of trying to find the media centre, I had no clue where it was! After asking security staff I found the media centre, showed my accreditation letter, picked up my pass, meal band (very important) and wifi log in details. Then it was a case of finding my workspace, getting the camera gear ready and heading out onto the course. Here is where the challenges started for me.

When I covered the Ryder Cup in 2010 I knew the course like the back of my hand; I knew where all the short cuts were to get to various holes, but at Gleneagles I had no clue about the layout so the practice day was more of a scouting mission around the course. An email was received from the Ryder Cup media team telling us that a section of the main stand had been allocated on a first-come-first-served basis to media, and I had already had a plan to get a shot of - that so I knew Friday was going to be a early start followed by a long day.