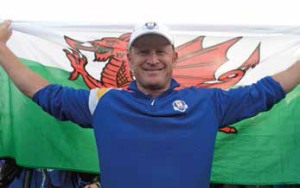 When the Sunday came around, it was tough getting the body to move as I was struggling from all the walking I had done during the previous four days. But this was single's day. This is the day that makes or breaks the situation. Europe were in a strong position, but two years previously the USA were miles ahead and only needed a handful of points to win, but Europe found strength from somewhere and had the mother of all comebacks to win. So this was at the back of everyone's mind. So, when the teams started teeing off, the atmosphere was electric, but I heard the crowd singing when GMAC (Graham MacDowell) walked onto the tee: "You got Big Mac we've got GMAC" which made everyone of us laugh.

I managed to get hold of a radio so that I could listen to the commentary throughout the day, as I knew the Cup could be won if results went our way. At first Europe were doing OK but Graeme McDowell was three down so it looked as though he wouldn't be getting one of the required points for Europe. Being the only Welsh photographer at the Ryder Cup and having the only Welsh player, Jamie Donaldson, I thought I would wait at least until he tee'd off. Once Jamie had left the tee I followed him down to the second green where the 9th runs alongside. So at this point I jumped across to the 9th to catch who ever was coming through. This was a good location as it meant I didn't have to travel as far to get to the 12th. I had missed McDowell and saw that Stenson was coming down the 9th. So I followed him down to the green where I waited for Rory McIroy to come through. And at this point McDowell was 2 up on his round (and bear in mind he was 3 down after six or so holes), but Rory was 4 up which meant he could potentially win his round on the 13th or 14th hole. So I waited and followed McIlroy round until I got to the 13th, and then made a decision to jump across to the 15th green and wait for him to hopefully win it on the 15th. My plan backfired because McIlroy went and won his match on the 14th! Disaster - but hey, sometimes that's how it goes. So at this point it was a case of two more points being required.

Kaymer was 3 up and could win on the 15th or 16th if he held his nerve. I picked up Kaymer on the 14th fairway, and followed him down but both the 14th and 15th the holes were squared. So I continued to follow down onto the 16th where Kaymer had hit his shot into the rough, just to the right of the green. Watson was just short of the green. I positioned myself opposite Kaymer's position and was on a wide lens as the crowds were all assembled on the embankment, and I was thinking this would be a great shot if he pulls this chip off. My thoughts of a wide shot were quickly ruined by two TV crews who stood about 10 yards in front of me and I had no time to move so I quickly picked up my 300mm lens and went in tight on Kaymer. He holed the chip and the place went crazy and so did Kaymer, I got nice celebration shots of him but I wanted the wide shot, so at that point I was pretty annoyed with the TV crews 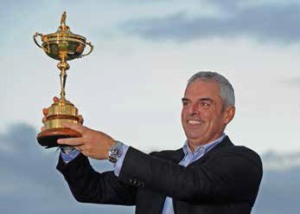 Kaymer had won his point for Europe and now only one more was needed and I looked at the scores - Thomas Bjorn was losing his game, Garcia was all square at that point; only Poulter and Donaldson were up in their games, and then I noticed Donaldson's move to 4 up. The way the scores stood Poulter would need to finish on the 18th to win his point, but Donaldson could win on the 13th, 14th or 15th. I picked myself up, I was feeling very weak and tired at this point - I had finished all my water supplies and had no food. Anyway, I made my way up to the 13th tee, which was about a quarter of a mile away. I got there and Donaldson had tee'd off and was half way up the fairway. I walked as quickly as I could to catch up. Donaldson won another hole and went 5 up and so this meant the next hole it could be all over. I doubt there were any photographers elsewhere on the course, the green was surrounded by snappers and we were all waiting for Donaldson to hole his putt and then for all hell to break loose. He missed the putt and the hole was all-square! It moved onto 14th and this time the US won a point back. So I was thinking Donaldson's head had gone and he was going to fold. I started to think that maybe Poulter could get the vital point, if he had a good run on the last few holes. All these thoughts were going around in my head. I followed the crowd of photographers down onto the 15th green, and at this point no one was photographing the players teeing off, it was a case of trying to get on the green to get the best position possible.


Please Note:
There is more than one page for this Article.
You are currently on page 3 Contact Ian Cook