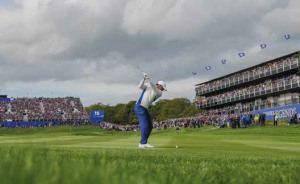 Friday 3:30am - my alarm rang and after my shower I caught a taxi to the media drop off point, the first media bus was 4.30 am and I was one of the first on it. Because of the early morning and lack of traffic we made good progress and got to the course at about 5.45. I got myself sorted - weather gear on, Think Tank modular belt system on, and out I went to get to the back of the grandstand which was really scary - getting up the metal steps carrying loads of kit. So I was one of the first people on the stand and just picked my spot, right in the middle and the waiting game began. The Ryder Cup is one of the best atmospheres I have been lucky to witness; it makes the hairs on the back of your neck stand up. So as the time got nearer for the first tee off (7.30am) the stands were filling quickly. It soon became apparent that I would not get the shot I wanted, as I was not tall enough, even though I was on the highest step! So I got my Lumix GH4 and put on the 8mm fisheye (equivalent to a 16mm fisheye in 35mm). Due to the wifi capabilities of the camera I could use my smartphone to change all the settings and see what the camera was seeing. So I put it on the monopod and positioned it about six feet in the air. The light was getting brighter by the minute leading up to the first match, but because I could change the setting on the smartphone, this wasn't a problem for me. 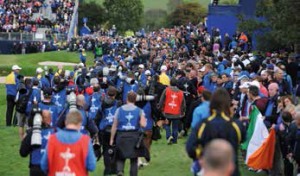 Once the players arrived on the tee the place erupted, it was electric. But I was prepared and as the European team lined up to tee off I was ready and fired the camera from the phone. As soon as I got this shot and checked it, it was a case of working my way through the crowd to get down onto the course. The course was full of spectators and luckily I managed to get hold of an inside the ropes access to the course which meant I didn't have to fight the crowds. Being Welsh I decided to follow new comer to the Ryder cup, Jamie Donaldson. The Ryder Cup is broken up into two sessions, mornings and afternoon, four balls in the morning and foursomes in the afternoon, and this repeats on the Saturday and then Sunday is singles day. The Friday and Saturday were spent trying to get images of every golfer plus a mix of fans and landscape shots. The Saturday session seemed very routine, but I was following Rory McIlroy and Ian Poulter down to the 18th (which was a dogleg right) and Poulter had ended up in the rough on the-left hand side of the fairway. So I got up close and got an ok shot of him hitting out; then it was McIlroy's turn and I saw a TV crew stand in the rough about 20 feet or so from him. I got my Lumix GH4 (which has silent shutter) and dived onto the grass next to TV crew, I was soon joined by another photographer who had the same thought as me, except he had a 1Dx and I had a GH4. Which meant I got the shot of McIlroy on his backswing and not the one of him after he'd struck the ball. People ask me why this I like this shot, it's because there is a media regulation in golf that you are not allowed to photograph the player until the ball has been struck as the noise of the shutter puts the players off. So apart from broadcast I have the only shot of McIlroy (that I know of) of him on his backswing on the 18th.


Please Note:
There is more than one page for this Article.
You are currently on page 2 Contact Ian Cook