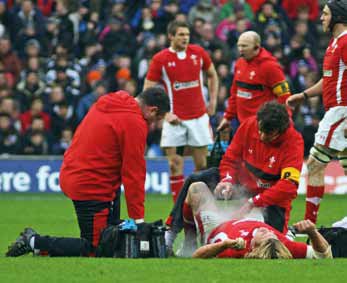 The good thing about an overcast day is that it results in even lighting and harsh shadows are avoided. When half of the stadium is brightly lit by the sun and the other half is in shadow, it plays havoc with getting the right exposure. In these situations, turning the ISO setting to Auto and manually setting the speed and aperture, means that the camera automatically does the work to get the correct exposure in the changing light.

When the teams line up for the national anthems, it is a good time to zoom in and get clean portrait shots of each player. These can sometimes be used as stock images by newspapers.

My coloured bib for the three matches put me behind a try line. This suited me as I like to have the players running towards me in full flow. I position my seat half way between the corner flag and the goal posts to catch the action in that quarter of the pitch with my 70-200mm lens. I also have my 300mm lens set up on my second camera and I use this one when the action is more than 40m away. I have both rigs on monopods and when it is time to swap over, I simply drop one onto my knee and pick the other one up from my other knee. This takes around four seconds and usually means I don't miss any of the action (but not always!).

My lenses are too short to capture the action at the other end of the pitch and it can be frustrating at times, especially when the team playing towards the other end is totally dominant. Despite all the preparation and planning, lady luck is involved in being in the right spot at the right time.

To take advantage of this luck, total concentration is needed at all times and my eye and trigger finger are always poised in position on the camera.

It can be difficult to enjoy the game when having to view it through the viewfinder for most of the time. At the end of a match my eyesight can take a while to adjust back to normal viewing.

The games in 2013 were the best yet in terms of atmosphere as Scotland actually played their best rugby for many years by beating Italy (34-10) and Ireland (12-8) and also gave champions Wales a good run for their money (18-28). The Italy game was particularly good as five tries were scored and there was lots of fast open play. This game had an added bonus as one of the match mascots was the son of work colleagues. They asked me to take photos of his big moment when the 22 mascots line up in front of the players to sing the national anthem, Flower of Scotland. My photo made the front page of two local newspapers.


Please Note:
There is more than one page for this Article.
You are currently on page 4 Contact James Gunn