For the second game on 24 February, it was a total mystery as to how Scotland beat Ireland 12-8. The Irish were totally dominant, having 70% possession and territory, 124 carries to Scotland's 35, 310 metres made to Scotland's 122 and 44 tackles to the Scots' mind boggling 128. Talk about backs to the wall! It just goes to show that the only statistics that count are the points on the board and these were all thanks to the boot of Greig Laidlaw. Ireland scored the only try and it was at the other end of the pitch.

The Wales game was a boring stop-start affair with a mind numbing 28 penalties awarded. This statistic is apparently a world record for an international game. However, it meant that I got some good clear shots of Wales' Leigh Halfpenny and Scotland's Greig Laidlaw kicking for goal.

It is good to capture all aspects of a rugby match and kicking is often a vital factor in winning a match. The scrum is another vital component, but it is very difficult to snap a good image as scrums are generally static and all you can see are legs, arms and bums! 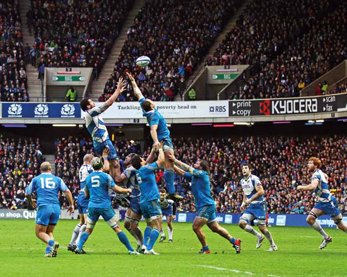 Lineouts offer a good opportunity for an eye-catching image, from either a side-on view or a direct frontal view. My position at Murrayfield meant that I could only capture a side view. The teams have lots of tactics at lineouts and the ball can be thrown just about anywhere for both height and length. This uncertainty makes it difficult to capture an image with good composition and sharp focus. A trick is to close down the aperture from the normal f2.8 to f4.0 to increase the depth of field and thus give a better chance of a sharp image. Also, go for a wider view to increase the likelihood of capturing the ball in the picture. If too wide, a tight crop can be easily done on the computer. If too narrow and there is no ball in the frame, there is no chance of recovery! For ball games, it is normally essential to capture the ball in the image to show instantly what game is being played.


Please Note:
There is more than one page for this Article.
You are currently on page 6 Contact James Gunn