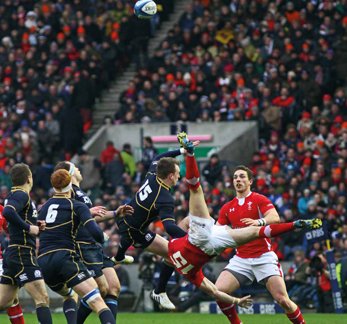 I'm always on the look-out for something different that will a catch the viewer's eye. The Wales game produced an unusually high number of opportunities. The first was when a Welsh player was down injured and the physio treated the groin area with a tin of spray that created a mini white cloud. The second was when Scotland's Ritchie Gray was injured and had to be stretchered off on a four-wheeled buggy. The third happened when Scotland full back, Stuart Hogg was warming up for the second half by doing a series of kangaroo-type jumps and I managed to catch him in mid-air with knees at chest level.

Wales scored the only try of the game and it was at my end of the pitch this time. However, it was a push-over try through a mass of players and a clear view was not possible. So no luck yet again!

The tremendous roar from the 67,000 crowd when Scotland were on the attack was something special and made the hairs on my arms stand up. International rugby is a totally different experience from snapping the action in Thurso's local park when Caithness RFC play in front of a crowd of 50!

Despite the long distance, time and effort involved in capturing the action in Edinburgh, the experience is a sports photographer's dream. It can only be topped by getting a commission to capture the British Lions tour of Australia this summer. Unfortunately, that really is just a dream!

See more of James' work on his website: www.jamesgunn.co.uk


Please Note:
There is more than one page for this Article.
You are currently on page 7 Contact James Gunn


There are 104 days to get ready for The Societies of Photographers Convention and Trade Show at The Novotel London West, Hammersmith ...
which starts on Wednesday 15th March 2023