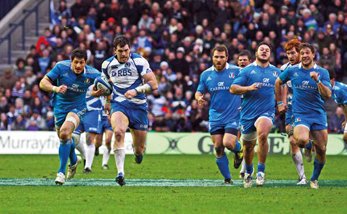 The three games were very different. The best and most exciting was the Italy match as Scotland scored four tries to Italy's one. It was the first time in 10 years that the Scots scored four tries. They scored three breakaway tries at my end of the pitch and I managed to get a good clear shot of Matt Scott's touchdown. However, the most spectacular touchdown was when Stuart Hogg flew through the air as he crossed the line. Unfortunately my pics of this were out of focus!

I only activate the camera's centre focus point as it is the quickest reacting and most accurate. The down side is that I have to be really accurate in pointing the centre of the viewfinder at the player with the ball when I press the shutter. Hogg was quite a distance away and so was small in the frame. I inadvertently focused on the front row of the crowd which was 10m behind him and even though I tracked him in AI Servo mode and high continuous shutter speed (8fps), the camera never readjusted. 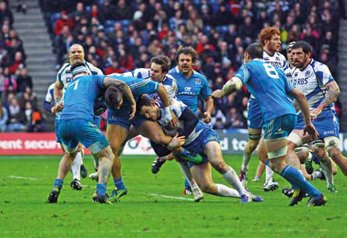 I find that this problem happens once or twice in any game and one way around this is to repeatedly 'feather' the shutter button. As I track a player in AI Servo mode, with the shutter button half or fully depressed, I take the pressure off the shutter button, readjust to point the centre of the frame at the player's torso and quickly depress again. This deactivates and then reactivates the focussing mechanism and minimises errors. The natural reaction during an action sequence is to keep the trigger fully depressed whilst in continuous mode, with the hope that the vital moment will be perfectly captured. However, with practice, feathering can be very quick and efficient.


Please Note:
There is more than one page for this Article.
You are currently on page 5 Contact James Gunn