Q & As from both Photographers

When did you get the call to cover the match and who were you working for?

I knew I was down to cover the Champions' League Final a year ago, (of course that depended on accreditation) but CameraSport share the events out to make it fare to our staff. I got the call about three weeks prior to the final.

Got my call on 9 May. I was very busy doing another prestigious UEFA tournament during that time - the UEFA Men's European Under-17 Championship - first ever UEFA major tournament held in my country, Malta - so that was good news!

As always I was freelancing for UEFA in general. This was my ninth final to date, thank God!

May was a good month to me - winning the "Sports Photographer of The Year" accolade in the Malta Journalism Awards at the beginning of the month, then being officially entrusted by UEFA themselves to be the UEFA Men's European Under-17 Championship (which btw England won) event photographer - having loads of home-page photos and others on the uefa.com site and then off to Lisbon for my ninth - absolutely massive!

How did you fly to Lisbon and how did you get on carrying your kit on board and with security at the airport?

I knew EasyJet had a carry on policy with unlimited weight restrictions, and I use a Think Tank Airport International 2 which is designed for aircraft carry on. I chose EasyJet purely for the reason that my kit could be with me at all times. The sports photographers who cover a lot of Champions' League games try to use EastJet; the thought of my kit going in the hold doesn't bear thinking about - I've heard some real horror stories about kit being damaged, bags being put onto a different flight and so on. I want my kit with me at all times, certain airlines have weight limits so it would be no good for us, as the kit weighs so much.

Bit complicated to be honest! Malta to Milan Malpensa. From there to Lisbon and vice-versa. Carrying all the gear with you is always the biggest problem you face. I divide all my equipment between baggage and cabin luggage so no wonder my baggage weighed over 20 kilos! 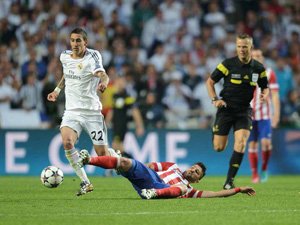 I know Nikon loaned you a new D4s for the match. How did you go about checking it over before committing to using it for such an important match?

I tested it out on my son on a trampoline, I had him jumping about in different directions to test the focusing out; all was ok, so I knew the camera was good to go. Finally I tried it out at the pre-match training sessions of both Real Madrid and Atletico. Also Nikon were in attendance at the event, so if there was an issue with the camera I could have taken it in to get it fixed. Overall, then I felt secure using a new camera.

What gear did you take to Lisbon?