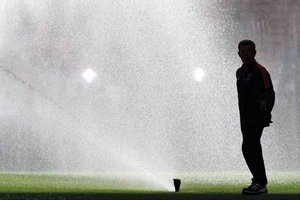 What pitch position were you allocated and what restrictions were there on movement?

The photographers were put in priority groups, 1, 2 and 3. Group one was the big European agencies such as Getty, Action images, Reuters, etc. There was a projection of a pitch with white squares in certain areas around the pitch, The photographers were called up one by one, and once the photographer had chosen his spot, that white square then turned red. So as this went on the red squares were filling up quickly and by the time it was my turn (Priority Group 2, Photographer Number 9) all the positions in front of the Real Madrid fans were filled by the time it was my turn. I went on the side, second in from the corner flag, I didn't want to go behind the goal because to the fifth linesman stands on the touch line and blocks the shot, I could have been blocked by the side linesman, but I took my chance. The goals were all the other end - it's just luck if anything comes your way!

You choose your allocation according to your priority selection. In my case I chose a comfortable mid-section position between the corner flag and the centre of the pitch with a very good view of one of the goalposts hoping I could get some goals.

It so happened that all five goals were scored at the other end ? Restrictions are that you cannot move from your assigned number position. 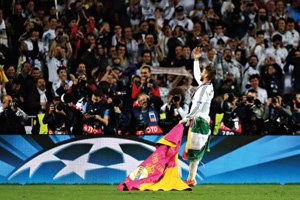 During the match how many frames did you shoot?

I shot about 2,000 frames; I wasn't worried about wireing the images out because I had a photo technician, Ashley, to do that for me. It meant I could concentrate on the game and ensure I got the highs and lows if they occurred in front of me.

Think I shot around 950 frames.

What format did you shoot in?

JPEG, I thought of shooting RAW but I decided against it; my Macbook didn't have enough space to hold all the images and it would have slowed the process down. I also shot JPEG to keep the process going a smoothly as possible.

Did you transmit any images during the game itself ?

Yes during the game because I had a technician (Ashley), he wired about 125 images out during the game. That's a lot but because he had only got one job to focus on it was amazing what he could achieve.

Yes I did - the first Atletico goal and the immediate celebrations- and then waited 'till extra time to get the Real celebrations and the actual postmatch Real Madrid trophy presentation and post-match party.

Did you track any particular player or did you follow the ball (or both?)?

Both. Because he is British the UK press are interested in Gareth Bale, but also Ronaldo because of his Mancester United connections and the other ex Premier League players; but generally I try to get images showing action and stock shots of every player - you don't know if the player in front of you is the next Manchester City player, etc, so it's important to get the stock as well as the key moments of the game. If they happen in front of you of course it's a real bonus.

I just follow the action - where the action is so I follow - they're all worldclass footballers, so they all know how to move the ball along ?. And I do not stop there - it is not just the action only we need, it is all about what is happening around the ground - both sides' fans, coaches' gestures, etc.