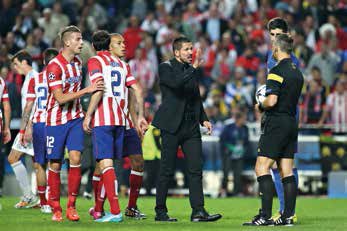 Diego Simeone complains bitterly about the five minutes of added time during which Sergio Ramos equalised to take the match to extra time. His mood was further inflamed by the end, ultimately resulting in a six-match ban.

I could not see you on TV in the scrum at the end, were you in there? Were you allowed free movement at the end?

For the trophy lift I was on the platform in front of the stand, but when it came to the players on the pitch I was blocked, a problem of being short I'm afraid. Then, when the players moved to walk around, it was just a crazy scrum, you fight your corner, and give as good as you can, some spots I couldn't get to just because of the number of photographers already there. So I had to move to a more selective location, hoping they would come to me; it worked a little but I was a bit disappointed if I'm honest.Domenic Aquilina

This showdown keeps on amazing me year after year. I saw a photographer who really surprised me to be honest - he was wrestling and barging in the scrum to get what he needed; I have never seen him in such a state! You are only allowed free movement to a certain extent. So in this case you have to use your wits. You can still take good pictures without getting in the scrum. 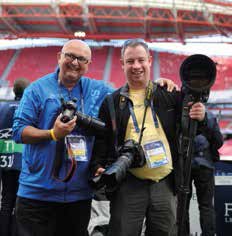 Our two miscreant 'togs, Domenic on the left, Ian on the right, taken before things got serious!

How did the D4s perform?

Great, fantastic actually, the sharpness was spot on. The focusing system was really fast at locking on. The only problem I had was I could not try it out on the 400mm f2.8 due to the pin mechanism jamming on my D4. Apart from that I was very impressed with its performance; the ISO capability on this camera is crazy, I seriously have to think now because when it goes back I will miss it, so might have to chat/pray to my bank manager to lend me some money to get one. It is a brilliant bit of kit, but I will give a more in-depth review later on - I could go on for paragraphs about this camera!

Did you see each other during the game or afterwards?

We saw each other before, during and after. We were at the pitch position selection together and we were on the same side of the pitch about 20 positions away, which was not far. And afterwards it was a case of we both had work to do and so we did what we needed to, I remember going to see Domenic and he was working on an image taken from a corner and it was perfectly timed with the goal-keeper punching the ball and the ball was at the end of his fist, amazing, I was thinking '*ugger I would have liked that shot'.

Yes we bumped into each other during the training session. We could not really socialise as we might normally do at the Societies' Convention - this was work!