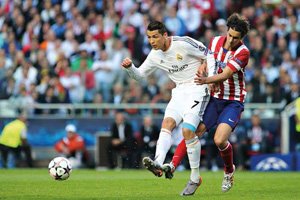 How did the practice sessions differ from the match itself? How many photographers were there and how many spectators?

There were a quite a lot of photographers at the training session, not as many as the final as some where flying in on the day of the game.

But all in all we all managed to get enough shots of what we needed.

Big difference involved between the practice sessions and the match itself! The big showdown of the entire season is the obviously the final itself. I believe 129 photographers were accredited to the final and 60,976 spectators attended.

The final kick-off was 8:00 pm local time. What time did you get to the stadium and what did you do ahead of the match? How was security to gain entry?

The day of the game was a long one, we arrived about 12:00 noon to ensure we got a workstation and in good time for the briefing at 13:30 about the rules for the final, etc. They went thought the prematch and post-match set-ups for photographers, etc.

Kick-off time was 19:45 local time in Portugal (20:45 CET). It is always my policy to arrive very early even when I am working UEFA Champions'' League group or qualifying matches. In this case due to time-frames set by UEFA for picking up your accreditation, I arrived at the Estadio da Luz around 13:00 hours. 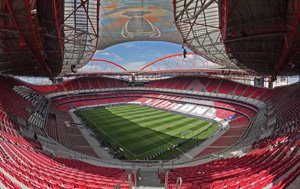 Real players are household names but how did you go about memorising the names of the Atletico players?

Really easy for me, as I'm sure with Domenic. Firstly the players have numbers on their shorts and the back of their shirts, and we had an official team sheet prior to kick-off with the team selection, so this was entered into a text file and loaded into Photo Mechanic. Then all that was needed was to enter the code, ie \r11\ out would come out "Real Madrid's Gareth Bale". Photo Mechanic is the sports photographers' secret weapon in captioning, and selection. Secondly, and most importantly, we are professional sport photographers and this is what we do, it's second nature to us as we live and breathe football so we actually know all the players by sight.

As I have often said before - you cannot shoot a sport without a general knowledge of the discipline or event you are shooting - in this case Real have household names but so do Atletico with the likes of Diego Costa and captain Gabi, to mention only a couple.

Atletico have been coming strong all season in the competition so if you follow the UEFA Champions' League you automatically get to know them well in the course of the competition.