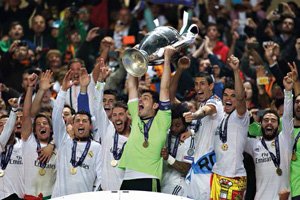 Did anything get published?

I'm not aware of anything, but we won't know fully till the payments come through, but you never know. There were 140 photographers pitch side, that is the highest number I have ever seen at a football game, it was crazy.

Unfortunately not on the night. I hope for eventual selection for future UEFA publications.

I note that almost within hours of getting back you were pitch side at Wembley Stadium for the League Two playoff between Burton Albion and Fleetwood. That is quite a comedown! How did the two experiences differ?

Very differentl! It's part of the job - we would all love to cover Champions' League final games only, but the bread and butter are the games that are lower down. I was extremely tired. But it's work and we do what we must to pay the bills. The difference in football skill is miles apart, and it was a lacklustre game at times, more volleyball than football, but that's the way it is and we get on with the job. I'll put the same effort into the Fleetwood game as I did at the Champions' League final, but it was harder to keep the concentration levels up with the game not being so good (and the fact I was tired from just getting back from Lisbon).

Of all the memories from Lisbon which will you remember most?

The game itself, the social side with all the Brit photographers, we all stuck together and had a good time. But the experience of shooting such a final for CameraSport was the main privilege. The whole experience will live with me for a long time.

All the finals carry a particular memory. I had some really good captures during this final so all in all it was another massive experience to bring along - and of course bumping into my big buddy Ian Cook!

Which single image were you most pleased with?

Being Welsh and even although there is a flaw with the image (right) due to the confetti or ticker tape putting a blur over Gareth Bale's face; it's my favourite because it's a Welshman holding the most prestigious Club Cup in the land and not only that, he scored the goal that turned the game in Real's favour. But another favourite of mine is not an action shot or a trophy lift, it's a ground view of Benfica's stadium, I had a Panasonic Lumix G GH4 with me and an 8mm fisheye, and went for a wander and took the image from right up in the corner of the stand; it was a bit sunny on one side but even so the less I really like that image, and in fact it's now my desktop background.